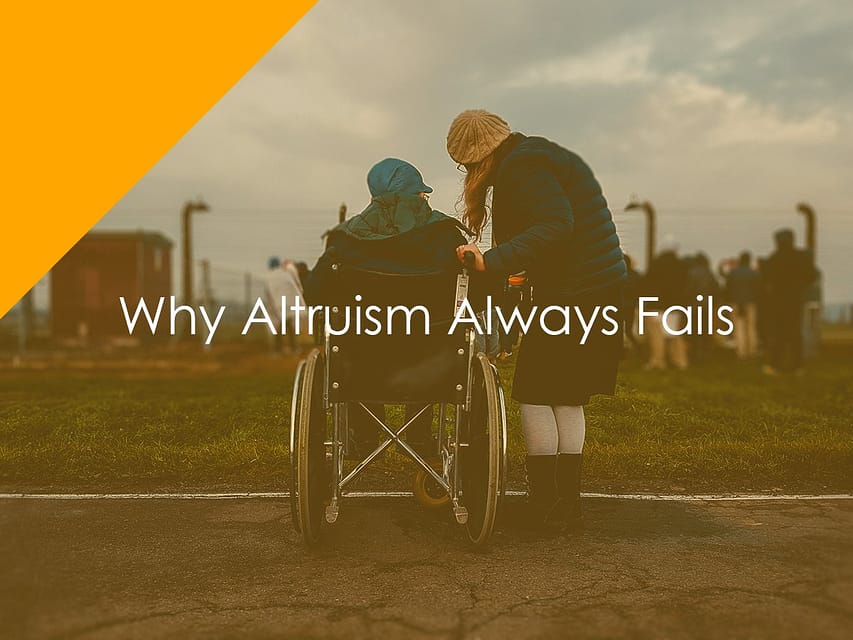 Today, I discuss altruism and how it leads to philosophical inconsistency then personal failure. 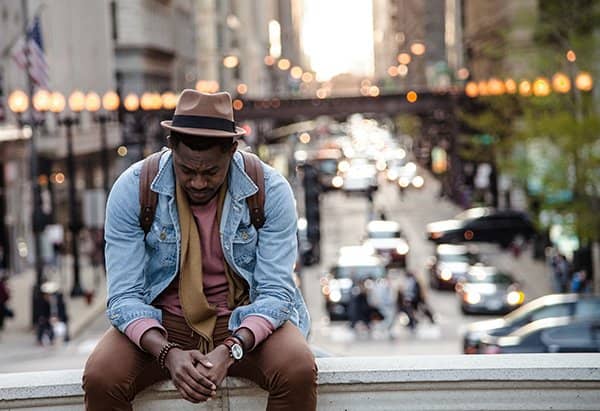 Altruism is a self-defeating and self-destructive philosophy.

“What is the moral code of altruism? The basic principle of altruism is that man has no right to exist for his own sake, that service to others is the only justification of his existence, and that self-sacrifice is his highest moral duty, virtue and value.” –  Ayn Rand

Altruism is “the belief in or practice of disinterested and selfless concern for the wellbeing of others.” Or “behavior of an animal that benefits another at its own expense.”

Altruism, like all collectivist ideas, places the individual at the bottom of considerations. Your value is not derived from how well you pursue your dreams, adhere to virtue, or build a sustainable life for yourself and your loved ones. Your value is determined by how “selflessly” you sacrifice your needs, wants, and standards to the service and whims of others.

For example, a sister is morally obligated to help her deadbeat brother. Under altruism, the sister has to abandon her mental stability, financial future, and emotional wellbeing to assist her brother for the “greater good.” Further, the sister is not “altruistic” if she has expectations, limits, and other reasonable desires when dealing with her brother. She has no right to exist for her own sake.

At the heart of altruism is self-sacrifice. All self-sacrifice achieves is a society full of bitter individuals looking for handouts because they are punished for and incapable of fulfilling their needs.

The Central Problem With Altruism: Complete disinterest is impossible 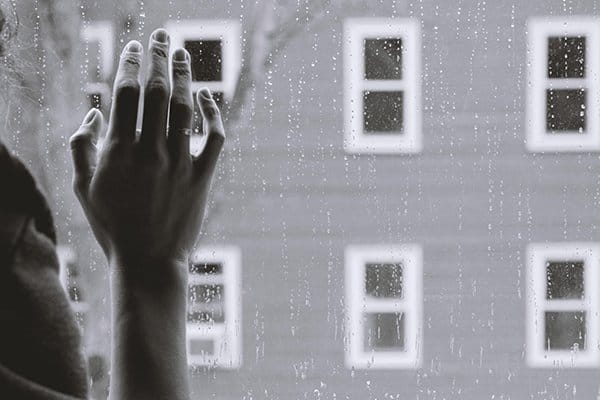 The altruist believes he can exist without motivation, even though such a state of mind is impossible.

Altruism fails because complete disinterest is impossible. We all have desires, and we exercise those desires through our actions. Even if those actions appear “selfless,” they are driven by what the individual wants.

For example, the monk pursues detachment from worldly things. The end goal is noble and difficult. However, he still wants something. The priest who attends to the sick and poor may put his health, comfort, and wellbeing on the line. Yet, he desires to help the poor and be closer to God.

No one acts without an end goal, and only the individual can pursue the actions an individual wants. The priest has a selfish desire to help others. Despite the nobility of his goal, there is nothing “selfless” occurring here. His self wants to help the poor, and only his self can act on his desire.

Like other collectivists ideals, altruism tries to force man into a position he cannot reach. We cannot “sacrifice” our wants and desires because no man can live without them. And whenever we act, we act because we want something. The desire to want something that fulfills an individual’s need is inherently selfish. Thus, altruism’s premise, that man can sacrifice his desires in others’ service, falls apart.

Why Is It Important To Move Away From Altruism? 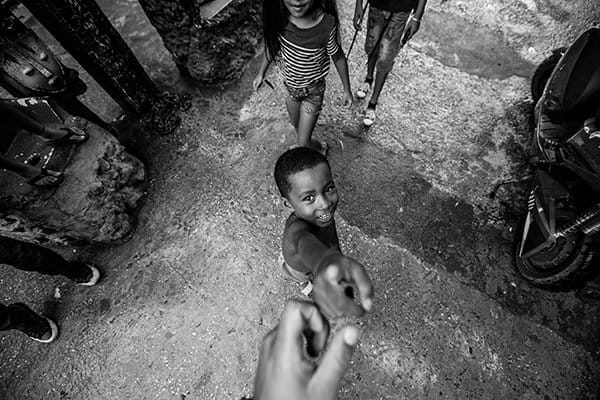 We should value moral character and consequences more than declarations of “selflessness.”

“It is your mind that they want you to surrender—all those who preach the creed of sacrifice, whatever their tags or their motives, whether they demand it for the sake of your soul or of your body, whether they promise you another life in heaven or a full stomach on this earth. Those who start by saying: “It is selfish to pursue your own wishes, you must sacrifice them to the wishes of others”—end up by saying: “It is selfish to uphold your convictions, you must sacrifice them to the convictions of others.” – Ayn Rand

I do not want to criticize noble goals. It is hard to care for the sick or seek spiritual enlightenment. I argue against the existence and moral superiority of “selfless” acts.

For example, we view the business owner as evil because he pursues a selfish goal: to make money for his benefit. Yet, his hard work brings affordable goods, sustainability, and business opportunities to his community.

However, we view the politician as good because he claims to work selflessly to benefit his community. However, his policies destroy businesses and lead to societal decay.

Because our society is altruistic, we value declarations of selflessness, even if such a thing is impossible. Further, we value selflessness more than we do consequences and moral character. Society treats the businessman with suspicion despite his virtuous character and contributions to the community. Society treats the politician as a good man, despite the instability his actions have produced.

Such an altruistic society can only produce what we currently have: a dog eat dog world where disingenuous declarations are more important than moral character.

The Three Ways To Oppose Altruism 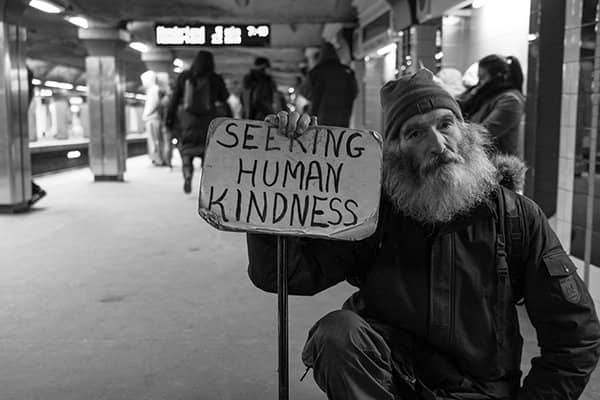 Weak individuals are too obsessed with themselves to overcome altruism. However, we don’t have to remain self-absorbed.

“Those who are happiest are those who do the most for others.” – Booker T. Washington

So, what can you do? Firstly, ignore weak individuals. They are always trying to break you. We’ve proven altruism is a self-defeating, poisonous philosophy. Thus, you don’t have to consider it.

Secondly, practice generosity. Generosity, unlike altruism, benefits the giver as much as the receiver. Further, charity is about helping virtuous individuals achieve sustainable ends. You help others with the expectation they will do right by you and take your resources to better themselves. If they do not, then you are under no obligation to continue helping them.

You Have To Value Yourself and Your Actions 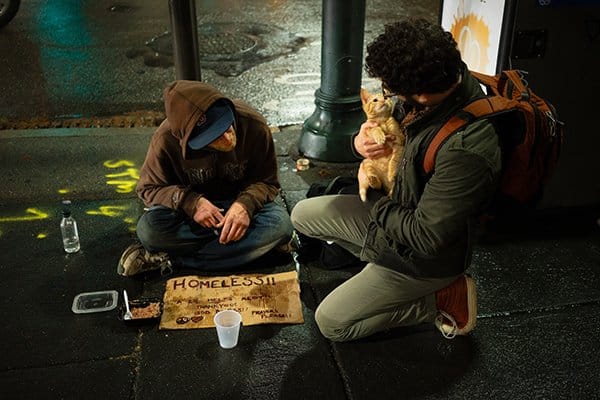 Focus on becoming a better individual, and you will see altruism as the ridiculous fantasy it is.

Lastly, improve yourself as an individual. Collectivists argue your actions are “selfish” and morally evil because your efforts benefit you. Thus, you are evil, and a rejection of your happiness is the only path to a moral life.

Therefore, if you feel doubtful about your acts’ meaningfulness and goodness, check your premises. You may feel your actions are “selfish” because they serve your vices instead of your virtues. If you direct your efforts towards helping your community, improving yourself, and overcoming your vices, you will not second-guess yourself.

Ignore the siren call of altruism. You can’t achieve good through self-sacrifice. You build a better future by becoming a virtuous individual and helping others do the same.

“There are two ways of exerting one’s strength; one is pushing down, the other is pulling up.” – Booker T. Washington

Why Collectivism Is Evil

Why People Oppose Individualism – The Introduction